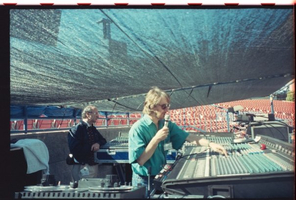 From the Studio to the Theatre Stage - After he had recorded the hugely successful  Variations album with Andrew Lloyd Webber in the seventies, Martin was invited to supervise the sound on the theatrical production of Andrew's Song & Dance in London in 1982. The impact of the sound production for that show led to Martin’s designing the sound for numerous stage musicals and concerts around the world over the next two decades. He became internationally renowned for his work on Phantom of the Opera, Cats, Kiss of the Spider Woman, Starlight Express, Sunset Boulevard and many others.

Award-Winning Original Cast Albums - Martin also produced and engineered the cast albums for many of those productions. The Broadway Cast Album for Cats, which he co-produced with Andrew Lloyd Webber, won the Grammy Award for Best Cast Show Album.
​
Technical Contributions to the Theatre - In 1988, Martin developed and pioneered the 'A-B System' to combat problems associated with the conventional method of combining multiple radio microphone systems on stage. Phase-related interference patterns resulting in coloration and distortion in the sound system had previously been unavoidable but the use of his 'A-B System' effectively eliminated this phenomenon, providing the audience with a much more natural, clearer and focussed sound.